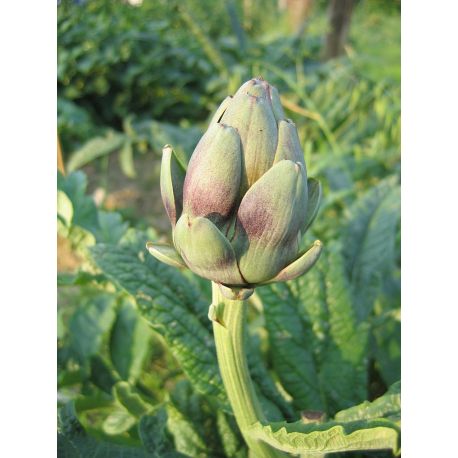 Facilitates the functions of urinary and digestive elimination; used as a choleretic and cholagogue; promotes renal excretion of water

The friend of the liver.

Indications and Uses of Artichoke

Traditional herbal uses artichoke fresh or dried leaves, juice (whole plant or various liquids) or solid extracts. In France, the Explanatory Note of the Medicines Agency (1998) admits that it is possible to use artichoke leaf

The beneficial effects of artichoke on the liver and gallbladder have long been known and appreciated usually the day after wake copiously watered. But as noted somewhat sardonically Bruneton * "For many pharmacologists, conditions treated and choleretic bile would solely from irritation of the gastric mucosa in these conditions, the interest to increase the secretion of bile or stimulate gallbladder contraction does not appear very clearly. "

The part used in therapy is the leaf taste bitter and not edible bract that we usually eat.
Native to Mediterranean regions, the artichoke was introduced in France in favor of the Italian wars.

Changing the perception of flavors

Botanical description of the Artichoke

The artichoke is a perennial with thick, fleshy root and lasts plant. The stem, about 1 meter high, no rower, door leaves very large segment divided deeply toothed, pale green above, whitish below lobes. Flowers are very large flowerheads 6-15 cm, surrounded by numerous bracts sharp, robust, fleshy at the base. The fruit is topped with a feathery plume.

Harvest: Harvested preferably the first year or at the end of flowering
Fast drying and good conditions for the leaves are light green and whitish on the upper face to the lower face.

According to recent data from the U.S. Department of Agriculture (2010), the antioxidant activity of artichoke, measured by the test ORACN is excellent. Apart from spices and herbs prancing head of rank parameter ORAC, the edible parts of artichokes are listed above all other vegetables and tied with red berries (cranberries, blackberries, blueberries). "Background" artichoke is the richest in total polyphenols in our diet vegetable before the parsley and Brussels sprouts (average 321 mg · 100g fresh vegetable, expressed as gallic acid equivalent).

Artichoke extract shows an ability to retard oxidation low density lipoprotein LDL (bad cholesterol). And as we know that luteolin (and to a lesser extent luteolin 7-0 glucoside) also manifests this activity, we are able to assume that the antioxidant activity of artichoke would, in part of its flavonoids. Recall that the oxidation of LDL causes the precipitation vessel walls and the formation of foam cells that reduce the diameter of blood vessels.
Hepatoprotective activity

The direct study of aqueous extracts of artichoke showed they were able to reduce lipid peroxidation and protect the toxicity of a hydroperoxide (t-BHP) on rat liver cells in culture. This type of testing has shown that the components of the artichoke as cynarin, luteolin 7-O-glucoside, or chlorogenic acids could contribute to the hepatoprotective potential of artichoke.
Choleretic activity

Saénz Rodrigez et als (2002) studied the effect of artichoke leaf extract (orally) on the secretion of bile (choleresis) in the Ratn 2. They observed a significant increase in the flow of bile both after a single dose after regular administration for 7 days. Artichoke extract exhibited even a similar choleretic effect of the drug reference, dehydrocholic acid.

It was also shown that the aqueous extract of artichoke leaves was in high concentrations, is able to inhibit cholesterol biosynthesis by rat liver cells in culture16 17.
Cardiovascular protection

Endothelial cells that line blood vessel walls release of nitric oxide NO causes a relaxation of their tunics and thus vasodilation. It was montré18 as wild artichoke (Cynara cardunculus) was able to increase the production of nitric oxide NO by endothelial cells of the aorta. Feeding old rats with thistle helps to restore vasomotionN 3 similar to that observed in young rats level. An extract of artichoke leaves can also stimulate the activity of a promoter of eNOS (endothelial NO synthase form) by endothéliales19 cells. It was also noted that if the flavonoids, such as luteolin and cynaroside accounted for an increase in mRNA expression of eNOS, against by the caféylquiniques acids (cynarine and chlorogenic acid) were without effect.