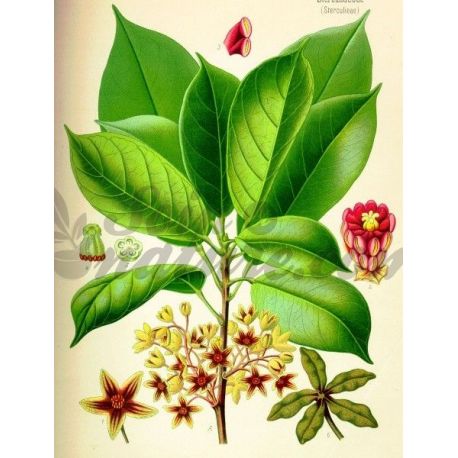 The kola nut contains caffeine, whose effects are more gradual than those of pure molecular caffeine. The pharmacokinetics of caffeine showed a side effect on the heart muscle (increased heart rate) and central nervous system (stimulation and excitement).
Experimentation of an extract of Kola nuts shows a lower peak concentration, it is now longer (lower curve but identical surface explaining a toxic effect threshold not reached). This phenomenon is explained by the affinity of tannins alkaloids, which form a delayed release caffeine complex with Kola in totum. It has adaptogenic properties. It is a plant that also stimulates the nervous system and increases blood pressure. It is an exciting brain (it helps in cases of excessive intellectual work). It is also diuretic.

The kola nut is used in particular for its stimulant properties but also has antidepressant properties. It is reputed aid digestion and to have aphrodisiac properties. including using the species Cola acuminata and Cola nitida. It has a bitter taste due to its high content of xanthines (caffeine especially, but also kolatine and kolatéine that soften the action of caffeine).

- Notice to athletes and people looking to lose weight by abusing supplements contain caffeine in large amounts: a caffeine intoxication may cause rhabdomyolysis, a condition that can cause serious and irreversible muscle damage

- Not advised for pregnant or lactating women

- The prolonged consumption of caffeine is addictive. Withdrawal can cause headaches, irritability, nervousness, anxiety, drowsiness, dizziness and confusion

- Do not combine with other cola drinks or foods containing caffeine

- The caffeine in cola can:

It is a medium sized tree that grows in equatorial zones of West Africa: Nigeria, Gabon, Sierra Leone. Its fruits are follicles and wood grouped stars. They contain 5 to 10 seeds per follicle.
Cola nut is consumed fresh in Africa as a masticatory.