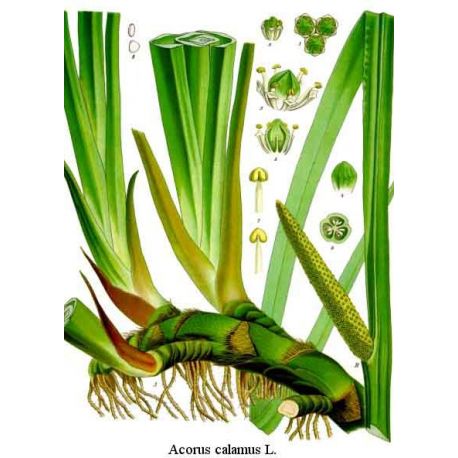 The rhizome provides an essential oil containing, for European variety of (p-cymene camphene) and mono-and sesquiterpene derivatives phénylpropaniques (less than 10%) represented by the above beta-asarone. It is carcinogenic and negatively affects fertility. The Americanus variety contains virtually no beta-asarone, while plants from India have the highest concentration (up to 96%) (1).

However, despite an ancestral use in India, the entire plant was never responsible for cancer (2).

It could, also called schoenante be a multiple components theriac the western maritime pharmacopoeia in the eighteenth century (3).

The Tartars employed to disinfect their drinking water (4).

The essential oil is extracted by distillation of rhizomes is used in perfumery.

In some countries, this plant is used to flavor beer or water-of-life (4).

She is known bugs away and therefore well protected fur (4).

Use of Acore advice odorant

Traditional use of fragrant Sweet Flag

The plant is cultivated in swampy areas and along rivers in Eastern Europe, only the rhizomes are used. Harvested in spring and autumn and dried in the shade, the calamus is a bitter tonic that stimulates the digestive glands. Used as a tea, it is effective against all stomach disorders such as bloating, nausea, gastro-esophageal burns.

It is also an aperitif plant, it is possible to make a liquor: 100 g of dried rhizome, 1/2 liter of alcohol, 1/2 liter of water; shake and filter after a week.

In Canada - where the plant is called beautiful-angelic by Quebecers and sweet flag by English speakers - some Indians chew rhizomes for their stimulating and therapeutic effects. At high doses, it can cause hallucinations visuelles5.

Sweet flag and its products are authorized in Europe with a maximum tolerated β-asarone 0.1 mg / kg in foodstuffs and 1 mg / kg in alcoholic beverages limit (1).

In China, the leaves and rhizomes broyés6 are used as insecticides against aphids, leafhoppers, rice pests and mites. The plant is also used in fumigation with wormwood against mosquitoes.

In India, it is used in Ayurvedic medicine under the name "Vacha" as nervous stimulant, digestive, emetic (high dose), expectorant and decongestant sinus, and as a diuretic (7).
History

Sweet flag as the Changpu 菖蒲 is part of the traditional medical field of China. We currently considère8 that the term may designate shuichangpu 水 菖蒲 Acorus calamus L. and Acorus shichangpu 石菖蒲 tatarinowii Schott.

The Calamus Changpu is quoted in the Chinese pharmacopeia Shennong first bencao jing (around the beginning of our era). The record shows: