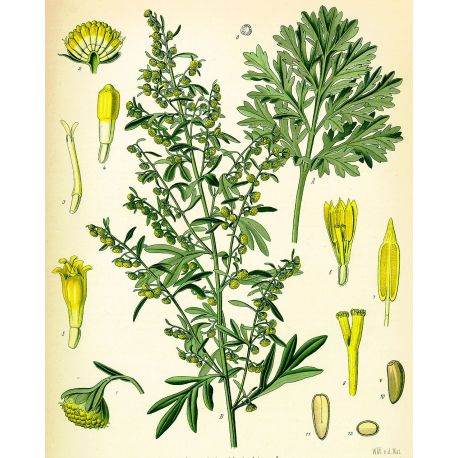 It is a perennial plant whose stem rower, which can reach one meter in height, is covered with a whitish down, giving him an ashen gray appearance. The lower part of the leaves are cut into narrow strips cottony white and particularly below. Flowers, divisible from July to August, greenish yellow, are small but numerous. They form small globular heads, pendants, gathered in clusters at the ends of branches.

Properties of the medicinal herb wormwood in the cup

Used as an anthelmintic in diseases of the stomach, causing the rules, against fatigue, against seasickness and nausea, this plant can be used as a tea with wine, beer powder as well as decoction. Externally, it uses a hot poultice, but also to the brew.

Indicated in patients with insufficient gastric juice increases blood circulation in areas of the basin (emmenagogue), biliary excretion, and acts as a disinfectant.

Absinthe should not be used more than 8 consecutive days because its effects would become void and, secondly, it may cause irritation of the gastric mucosa and influence the nervous system.

Do not use if pregnant

The plant has hazardous active substances.
Use of the drug should be limited.
Do not use in pregnant or nursing women: abortifacient effect (risk of false significant layer).

Infusion of wormwood leaves: Put 5 g of dried flowering tops of leaves of wormwood per liter of boiling water, take a small cup 2-3 times a day.
Maceration of leaves of wormwood: you can get wine or liquor. For ratafià must marinate 15 days in 1 liter of brandy at 60 ° mixing 40 g of absinthe leaves, 20 g of juniper berry, 5 g of cinnamon and 1 g of fresh rod angelic. After filtering the mixture of 1/3 liters of water is added 15 g of orange flower water and 250g sugar
Powdered wormwood leaves: grass so employed may serve deworming: the dose for a potion is then 2 to 3 grams.
Tincture of wormwood leaves: 10 to 30 drops in 100 ml of water, take 2-3 times a day, 3 minutes before the meal (as a tonic); 20-60 drops 3 times a day in 50 ml of water (for bile).