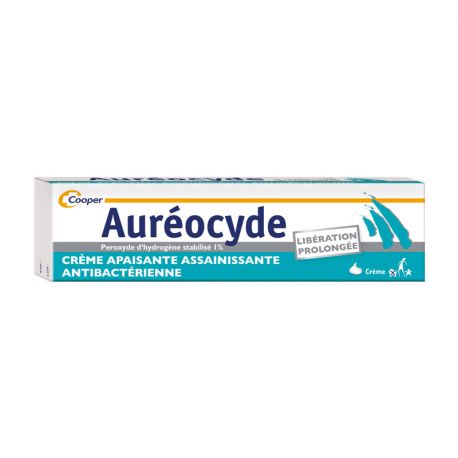 Auréocyde Cleansing Cream and Antibacterial Peroxide Hydrogen Stabilized15g is a sanitizing and anti-bacterial cream to treat superficial lesions of the skin such as burns, acne, cuts, wounds or punctures.

Directions for use Cooper Auréocyde Cream

Composition of the Aureocyde Antibacterial Cream

The Auréocyde antibacterial cream benefits from a special galenic, the Crystalip system, to maintain the effectiveness on bacteria over time (8 to 12 hours). Aureocyde forms a non-occlusive protective film on the skin. This cream can be used in children from the age of 3 years.

Precautions for use with the Auréocyde Cooper Ointment

The Aureocyde Antiseptic Ointment is in the form of a 15g tube.

Auréocyde is an antibacterial sanitizing cream ideal for the treatment of cuts, wounds and infections ( eczema, mycosis, cold sore, furuncle, ingrown hair). Ideal for treating small skin infections, it is THE product to have in your pharmacy kit ...

Cooper Aureocyde is an antiseptic ointment and is toxic to all skin cells, both infectious and normal. To differentiate with an antibiotic ointment (like fucidine for example) which is more selective and attacks the microbes while respecting the normal cells. An antiseptic is used preventively to avoid an infection . An antibiotic is used in a curative manner to eliminate an infection.

In practice, it should be known that the application of an antiseptic is followed after a half hour of a proliferation of reactive microbes remaining and an antibiotic is really active only the first days. After a week, if there are still microbes they will become resistant.

What is the conduct to take in case of a burn? And how do you treat her?

What is the conduct to take in case of a burn? And how do you treat her? Let’s start with the role of the skin In order to prevent a burn from getting infected automatically, the skin plays an indispensable role in ensuring this function. It acts as a barrier, both mechanical, chemical and bacterial. The cohesion of the cells of the corneal layer and the rapid renewal of keratinocytes limit bacterial colonization. When the skin undergoes alteration or dysfunction such as a burn, a pathological process can occur, including an infection involving microbial flora. The healing of a burn progresses in three main phases: First, the exudative phase Second, the proliferation phase...