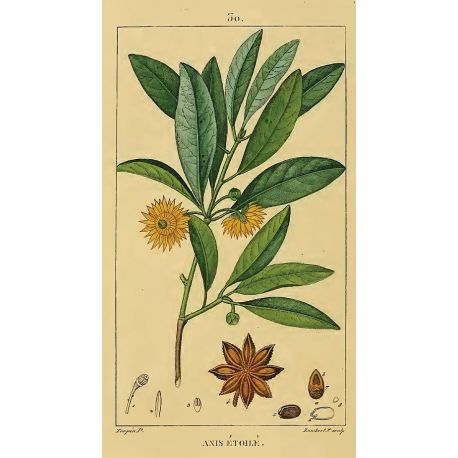 Star anise has carminative and stomachic properties. Used in infusion, it removes and reduces bloating gas.

Chinese anise is also used in the production of shikimic acid. This acid has no antiviral activity will be transformed several times before becoming oseltamivir phosphate, the active molecule Tamiflu flu drug Roche laboratories used against human influenza, and in the absence of other drug against the avian flu and swine. The manufacturing process is not in a way as to achieve distillation of the essential oil. The pharmaceutical use of Chinese star anise is the origin of the outbreak of the prize. However, oseltamivir can now be obtained from different processes (bio-fermentation, chemical synthesis, other plants), prices may need to fall.

Be careful not to confuse, especially when powder, star anise and Chinese Japanese star anise, which is toxic and its use is not allowed in France.

Heat the water to a boil then add the boiling water about 8 fruits anise.
Let steep for ten minutes (to get an effective dose of the active substances).
Drink one cup several times a day, preferably after every meal (about 3 times) for digestive disorders.

Chinese star anise is an average tree 3 to 5 meters in height. The trunk is strong enough, is branching, thick, covered with a grayish bark. The leaves are a nice green, reminiscent of laurel, rain or connected persistent. The fruit is the result of the meeting from August to December shells assembled star; pericarp is tough, it opens on the inner edge and contains a brown seed, round and shiny.
Anise odor.
Pungent and spicy flavor.

The Chinese know it under different names. The most common, linked to eight lobes gave the Chinese name can be literally translated as "eight horns" (Chinese: 八角; pinyin: bā jiǎo, Cantonese Jyutping: baat gok; 八 "eight" 角 "horns"). This term pronounced in Mandarin "badjiao" is probably the origin of the French name anise.