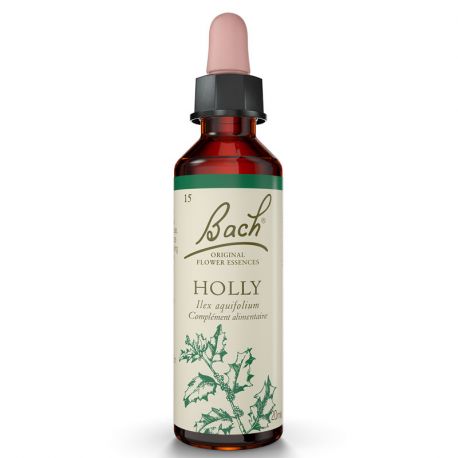 The negative character of Holly is consumed by hatred, envy and jealousy. With perhaps unconsciously insecurity, these people are suspicious and aggressive. They are unable to love and live in a constant state of anger towards others.

They tend to have a bad temper, a heart of stone, even cruel and sometimes violent. Internally they suffer - often without good reason. They often suffered from a lack of love or emotional injury in childhood and therefore have closed their hearts.

Holly is the Bach Flower suitable for children jealous of their brothers and sisters. It is important Bach flower for those interested in spiritual development as it allows to be able to give selfless love.

The positive potential of Holly is a generous person in heart, capable of giving without asking for anything in return. This is an affectionate and endearing compassionate person who is willing to share a non-exclusive, even when she has her own personal problems. Supported by a sense of inner harmony, she sincerely welcomes the success of others. Dr. Bach wrote: "Holly protects us from everything that is not universal love Holly opens the heart and unites us to God's love.".