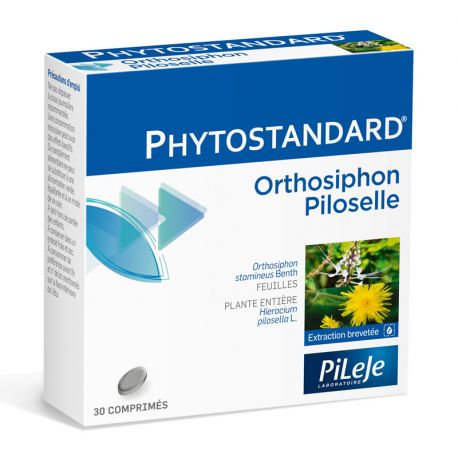 The Phytostandard Orthosiphon Piloselle food supplement from Pileje laboratories promotes the drainage of the body.

Phytostandards are extracts produced from selected plants whose origin is traced. They are obtained using a patented process that respects the integrity of the plant. These extracts are standardized and ensure a constant and stable content of active ingredients. The orthosiphon takes its name from the Greek "orthos" which means "slender", and "syphon" which means "pipe", because of the characteristic botanical aspect of its corolla. Native to Southeast Asia and northern Australia, orthosiphon is a 30 to 60 cm perennial herb. The one used for our Phytostandard comes from the Island of Java (in Indonesia) where it is grown on small plots in order to preserve the balance of the local ecosystem.

Small in size but great in its properties, the piloselle is a plant used since the Middle Ages. Common in Europe, it is also widespread in the temperate regions of Asia and North America. For the production of the Phyostandard extract, the piloselle is harvested in France, by hand shortly after the start of flowering, in August and September. In order to better preserve its compounds, it is then frozen on site and transported to the extraction site in Ariège.

Phytostandard orthosiphon piloselle from Phytoprevent is a food supplement that promotes the drainage of the body, thanks to the combined action of two plants have diuretic properties:

Resulting from PiLeJe research, this food supplement is produced with the patented Phytostandard process . It makes it possible to restore the majority of the compounds of the plants while respecting their integrity .

Comment on the advice for use of Phytostandard Orthosiphon Pilioselle after your purchase on our partner verified reviews.

The advice of your expert Pahramcian

Phytostandards are produced from plants preferably from organic farming and whose origin is traced. Manufactured using a patented extraction process, they benefit from PhytoPrevent 's expertise and know-how.

Orthosiphon Piloselle PHYTOSTANDARD is a food supplement in tablets based on two plant extracts The extract of orthosiphon (leaves) and piloselle (whole plant). It is made from fresh plants harvested then frozen, this technique allows the preservation assets . The orthosiphon has depurative and diuretic properties, it also contributes to good liver function. Moreover, in addition to dietary measures, it helps to facilitate weight loss. 10 to 15 cm tall and grows throughout Europe as well as Western Asia. It is traditionally used to contribute to normal urinary elimination functions.

The EPS or Standardized Fresh Plant Extract are obtained by the " Phytostandard " extraction process which respects the integrity and completeness of the active ingredients present in the plant. We suggest that you prepare your EPS mixtures , according to the formulas recommended by your Naturopath . 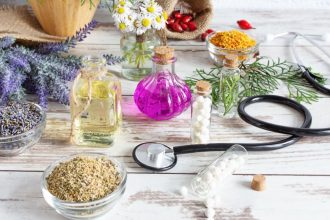 Medicinal plants and contraindications depending on the pathologies

Most medicinal plants do not pose a significant health risk; however, there are cases where some herbs can produce unwanted effects. Therefore, their use is limited to certain situations. To assess the degree of toxicity of a substance, factors specific to the exposed subject such as age, weight, sex, physiological status, etc., as well as environmental factors, should be taken into account. Colitis and gastritis : Colitis is inflammation of the colon. Rarely limited to the large intestine, it is usually associated with inflammation of the small intestine (enterocolitis). Colitis can present more serious forms: bacterial, hemorrhagic, ulcerative colitis, etc. A special form, called... 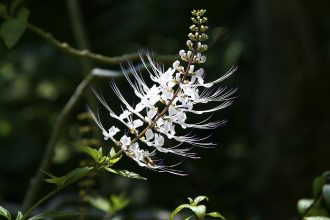 The Orthosiphon, remedy for the urinary tract par excellence

The orthosiphon is a beautiful elegant impulsive, and as soon as you see it, you want to pick it. But once consumed, a beautiful diuresis will ensue , and you will remember its effective intervention. She will make you dance the Javanese if you have to hold back, don’t mind. How not to assiduously resort to Java tea, imbued with a refined Asian exoticism , with its corolla in the shape of a pipe (from the Greek siphon ) straight and slender ( ortho ). A little history Here is a plant which for nearly a century has been able to seduce the West , he who knows how to siphon the urinary tract very delicately, which helps not to sow small stones in the urogenital tract, which knows how...