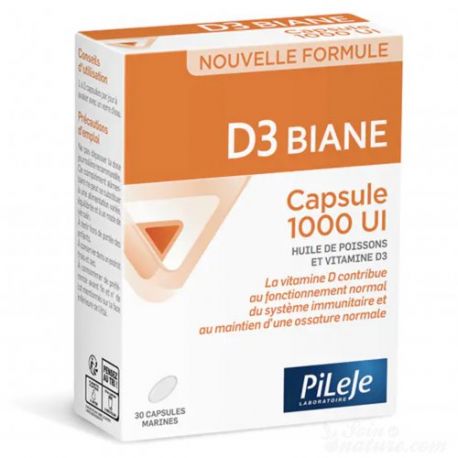 BIANE D3 Food Supplement from PILEJE Laboratories is a food supplement designed to preserve your vitamin D3 intake. Vitamin D3 deficiency is common in many European countries. The production of this vitamin takes place mainly under the influence of direct sunlight on the skin.

What are the indications for Vitamin D3 Pileje?

This food supplement based on Vitamin D3 is intended to respond effectively to deficiencies linked to insufficient exposure to sunlight (in winter, for example), and to needs increasing with age. Overweight people are also more prone to vitamin D deficiency .

Vitamin D is not called "sunshine vitamin" for nothing: indeed our body can only produce it if the skin absorbs enough sun. Especially in winter, when the sun is too low, the intake may be too low. Therefore, in the winter period, the level of vitamin D tends to decrease. But even in summer, various factors, such as the type of dark skin or even age, can alter the synthesis of vitamin D. It is therefore all the more important to pay attention to your vitamin D level throughout of the year and, if necessary, to resort to a supplement. Because the fat-soluble vitamin is not only essential for bone metabolism , but also performs important tasks with regard to the immune system , cell division and muscle function .

A recent study carried out by the Institut National de Veille Sanitaire (INVS) shows that in France 80% of French people are deficient in vitamin D.

Vitamin D has the particularity of being both provided by our food (for a third) and synthesized by our organism by the exposure of our skin to the rays of the sun (for two thirds). This specificity explains the frequent deficits in vitamin D during the winter or for people exposing themselves little to the sun.

Fish in general and cod or halibut liver oils are excellent concentrated sources of vitamin D3 chosen by the PiLeJe laboratory.

Acting in a large number of metabolisms, vitamin D acts on bone density by promoting the assimilation of calcium. It also plays a role in our immune defences. Its contributions must be optimized for certain categories of the population.

Vitamin D has the particularity of being both provided by our food (for a third) and synthesized by our organism by the exposure of our skin to the rays of the sun (for two thirds). This specificity explains the frequent deficits in vitamin D during the winter or for people exposing themselves little to the sun.

1 capsule per day for 1 month renewable.

D3 Biane supplements dietary vitamin D intake: one capsule contains 500% of the recommended daily intake of vitamin D, which contributes to the maintenance of normal bones and the normal functioning of the immune system.

How to avoid vitamin D deficiency ?

According to a report by the French Academy of Medicine, nearly 80% of the Western population and almost all the elderly are deficient in vitamin D, because after a certain age, the body no longer synthesizes vitamin D as easily. Vegans are also at risk of deficiency.

Vitamin D deficiency can cause:

Precaution for use of D3 Biane PiLeJe

Do not exceed the recommended daily dose. Keep out of reach of children. This dietary supplement cannot replace a varied, balanced diet and a healthy lifestyle.

Storage: in a cool, dry place. 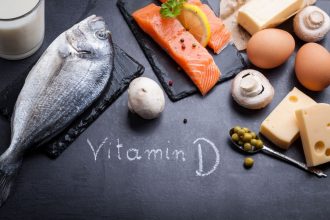 Vitamin D, all its seasonal benefits

In winter, it is difficult for the body to synthesize vitamin D, which can lead to many health problems (depression, poor absorption of calcium and phosphate, increase in autoimmune diseases, etc.) Insufficient exposure to sunlight predisposes to vitamin D deficiency. Deficiency induces disturbances in bone mineralization, leading to rickets in children and osteomalacia in adults and may contribute to osteoporosis. It is therefore advisable to do two cures per year: At the beginning of autumn and at the beginning of spring. What is vitamin D? Vitamin D or calciferol is fat soluble. It is also a hormone found in food and synthesized in the human body from a derivative of cholesterol under...