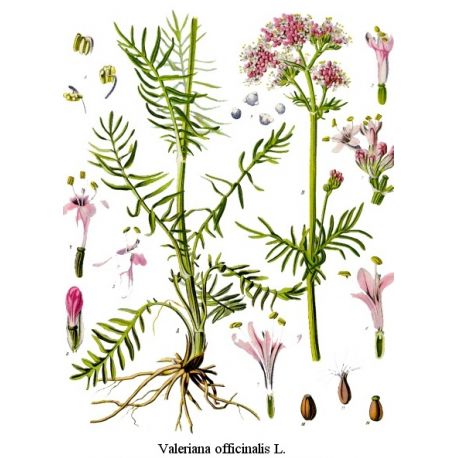 Valerian root has sleeping pill and anxiolytic properties by valerenic acid. It is antispasmodic, sedative, tranquilizer, muscle relaxant and depressed nervous system. It inhibits the reuptake and stimulates the release of GABA (inhibitory neurotransmitter); valerenic acid is a ligand for the GABA receptors and inhibit GABA transaminase. Sesquiterpenes and valepotriates bind to benzodiazepine receptors. Flavonoids such as apigenin, hesperidin and linarine bind to central receptors. It has been shown that this plant and reduces stress induced by reducing the rate of monoamine neurotransmitters. The aqueous root extracts contain significant amounts of GABA that could directly cause sedation, but there is some controversy surrounding the bioavailability of the compound.
The valepotriates, antidepressants, are found very little in the pharmaceutical preparations, but the degradation products (baldrinals and other derivatives) are active. The hypotensive valéranone is 5 mg / kg.

Valerian is used in the following therapeutic indications:

- Neurotonic States and autonomic dystonia in adults and children

- Adjuvant in smoking cessation and in epilepsy (petit mal children)

- An overdose of valerian can cause fatigue, hypotension, heavy headedness, mydriasis and abdominal pain

- Not recommended for children and pregnant women

Its name comes from the Latin "valere" = "do well" (which gave "validity" and "con-convalescence"). Before the arrival of synthetic tranquilizers, valerian root was considered the most effective painkillers. In ancient Greece, Hippocrates and Dioscorides recommended it to treat insomnia.

- Native perennial herb of 0.40 to 2 m
- Stem erect, hollow, fluted
- Leaves in a rosette at the base, opposite on the stem, with many acute lobes toothed
- Pink or white flowers in cymes umbel

An alternative approach in epilepsy

Nervous system disorders and epilepsy Still called “mal comitial” or “comitialité”, epilepsy is a very common neurological disorder which affects approximately 50 million people worldwide. It is the second neurological pathology in France after Alzheimer’s disease. There is not an epilepsy , but many forms, with very diverse manifestations, depending on the area of ​​the brain concerned. Epileptic seizures are caused by excessive discharges of brain neurons. Seizures qualified as “petit mal” mainly affect young children and the elderly and are essentially not manifested by absences of relatively short duration (a few seconds). When this disease affects children, it disappears in 6...