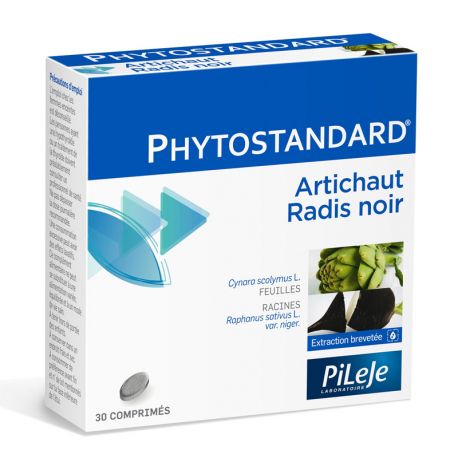 The Phytostandard Artichoke and Black Radish is advisable to support the liver in its functions at each change of season, after a high-fat meal, in case of indigestion or bowel dysfunction.

The Phytostandards products are extracts from selected plants whose origin is traced.
They are obtained by a patented process that respects the integrity of the plant. These extracts are standardized and provide a constant and stable level of active principles.

Some plants such as artichoke and black radishes are traditionally used to improve liver functions:
- The artichoke leaves are traditionally used for their properties in case of indigestion and bowel dysfunction
- The black radish root, rich in sulfur compounds, glucosinolates, is the major plant liver detoxification. It is useful to reduce the inconvenience of a high-fat meal or to promote the elimination of toxins.

1 to 3 tablets in the evening, preferably taken without food.

The black radish is a vegetable native to Asia, with black skin and white flesh. It has a tangy flavor due to its high sulfur. Our grandmothers were a remedy against cough, with the black radish sliced with melted sugar.
Black Radish contains numerous organic sulfur compounds and minerals (calcium, magnesium, iron). Its beneficial properties are inherited from ancestral traditions. If today consumes cooked like a turnip, or raw, grated in salads with a little cream, it is also known to promote the welfare of the liver. Its beneficial effect on the hepatobiliary based on the ease of flow of bile (bile). The black radish is known to facilitate the functions of digestion and elimination. These facts are well-reinforced artichoke.

Not recommended for pregnant and lactating women and children under 12 years.
This dietary supplement can not replace a varied, balanced diet and a healthy lifestyle.
Excessive consumption may produce laxative effects.
A best before end and batch number mentioned on the underside of the case.
Do not exceed the recommended daily dose. Store in a cool, dry place. Keep out of reach of children.

EPS or Standardized Extract fresh plants are obtained by "Phytostandard" extraction process that respects the integrity and completeness of the active principles present in the plant.

We suggest you prepare your EPS mixtures , according to the formulas recommended by your Naturopath.