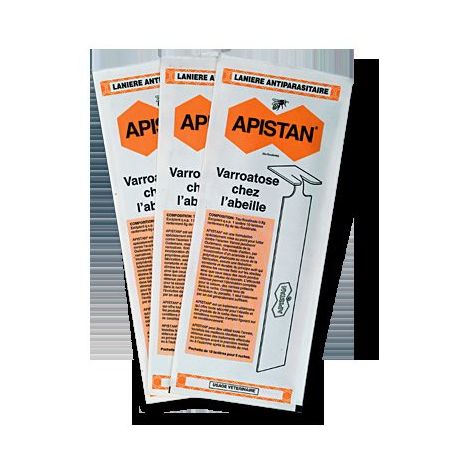 Varroa treatment due to Varroa destructor in honey bees

In bees:
- Varroa treatment due to Varroa destructor.

Apistan® is probably the best defense against varroa mites. Since the 80s, Apistan is the reference treatment and its use is now registered in over 40 countries. Its use is very easy, just insert two strips in the hive body, end of season, and for 6 weeks.

USE and DOSAGE OF apistan

Method of administration
The strips are joined to one another during manufacture. Just separate them and insert them between frames hive body; the straps will be maintained vertically between frames by their built suspension system.
Use two straps for a hive Dadant types (10 frames). Insert strips between frames 3 and 4 and between frames 7 and 8 of the hive body.
For nuclei and small hives, only one strap is sufficient, to be inserted between the frames, in the heart of the swarm.

Duration of treatment
The strips should be left in the hive for a minimum of six weeks and removed after 8 weeks of mandatory presence in the hive.

Given the evolution of the parasite, a single treatment a year is usually enough.
This product can be used all year. However, the best results are obtained with treatments performed in the spring before the first honey flow or fall after the honey harvest.
Do not reuse strips.

Keep the strips in their original closed packaging, away from food and chemicals that could possibly contaminate.
Use the strips immediately after they exit the pouch to avoid its pollution or contamination.
Do not expose the strips to direct sunlight.
Do not store above 25 ° C.