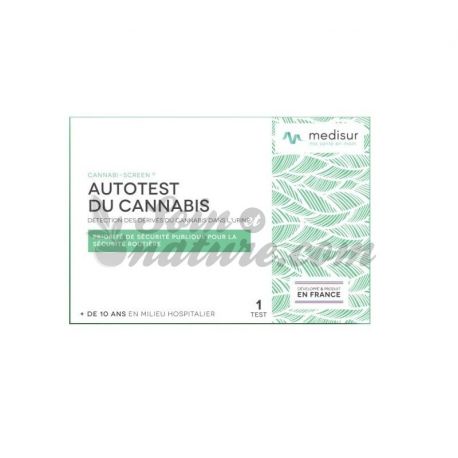 Urine Self Test Cannabis Detection Medisur is a rapid self test for the detection of cannabis derivatives in urine.

Δ9-THC is the main psychoactive component of cannabis. It is metabolized to 11-nor-Δ9-THC-COOH or THC-COOH for removal in the urine.
Cannabis use can lead to disorders of the central nervous system, altering sensory perception, coordination and memory.
Consumers also describe other symptoms such as paranoia, anxiety, depression, confusion, hallucinations and increased heart rate. These di ff erent e ff ects have a negative influence on the ability to drive a vehicle.

EPIDEMIOLOGY: In 2014, 17 million people reported having already used cannabis during their lifetime, 4.6 million during the year, 1.4 million at least 10 times during the month and 700,000 daily.

The AUTOTEST CANNABIS can detect cannabis from 30 minutes after consumption and over a period of 2 to 7 days for an occasional intake, or even longer for regular users. The test relies on the use of antibodies specific for THC and its derivatives. The test is able to detect in the urine a concentration of 50μg / L above which the result is positive.

OBJECTIVE OF THE TEST: The objective of this test is to detect cannabis use dating from 30min to 7 days. This is not a tool that allows the user to avoid police checks.
The use of cannabis, unlike alcohol, being banned in France, the tests of the gendarmerie detect "the least trace". The driver would expose himself to heavy criminal penalties.
WHO TO RECOMMEND THE TEST: The patient wants to know if it is detectable with cannabis for a contest of the army or the police for example.
The patient wants to know if a loved one / his children are using cannabis.
Reliability 94%

Medisur Autotest Urine Cannabis Detection is a test that detects THC and its derivatives in the urine. THC is a drug that can cause disorders of the central nervous system by altering sensory perception, coordination and memory. These effects have a negative influence on the ability to drive a vehicle by increasing the risk of an accident.

Advice for use and dosage

PRECAUTIONS: The test can be performed at any time of the day. Attention, at a regular consumer it is advisable to wait at least 24 hours after the last consumption to get behind the wheel and that the gendarmerie salivary test is negative.

1 strip, 1 cup for the collection of urine, 1 desiccant sachet, 1 instructions for use.

Our advice and expert advice in pharmacy

This self test comes from hospital research and has been adapted for individual use.
It is used in more than 100 countries .

Medisur self-tests, tests to be done at home, available in pharmacies