Dietary supplement based on Rhodiole fluid extract (Standardized and stabilized) Alcohol-free
PhytoStandards are fluid extracts, produced from selected plants whose origin is traced.
They are obtained according to a patented process that respects the integrity of the plant. These extracts are standardized and ensure a constant and stable content of active ingredients.

2 SPASOV AA et al. A double-blind, placebo-controlled pilot study of the stimulating and adaptogenic effect of Rhodiola rosea SHR-5, a result of stress during an examination of a repeated low-dose regimen. Phytomedicine 2000; 7 (2): 85-9.

- Anti-fatigue, increases physical and mental performance
- Against memory deficits: promotes attention, intellectual ability and memorization. Anti-stress in students during exams. Memory for studies of children and adults.
- Fight against anxiety and on senile dementia
- Nicotine withdrawal and weaning of tobacco in a natural way

- Normalizes the heartbeat and lowers blood pressure.
- Allows the absorption of iron and ensures a good blood glucose - insulin level
- Effect on the immune system

Duration of the supplementation: 9 to 18 days. To renew according to needs.
To be taken outside of meals, to be diluted in a large glass of water, or a fruit juice.
Precautions of the EPS PiLeJe PhytoStandard Rhodiole

Historical
Also known as "pink orpine", "pink rhodiole" or "golden root", the rhodiole owes its Latin name to the subtle smell of rose released by its rhizomes when they are cut. It has been used in traditional Russian and Scandinavian medicine for centuries. The Vikings used it as a tonic, Inuit and Lappers used the leaves for their stimulating effects. Traditional Chinese medicine used various preparations of this plant to increase physical performance, reduce fatigue, against various infections ...

In his book De Materia Medica, Dioscoride, in 77 AD, postponed for the first time medicinal applications of rodia riza. Linnaeus renamed it: Rhodiola rosea by the similarity of the smell of rose released by the freshly cut roots.
In traditional folk medicine rhodiola rosea root is used to improve physical stamina, work productivity, resistance to altitude sickness and fatigue. As well as against depressions, anemia, impotence, infections and disorders of the nervous system.
In Europe, it is traditionally used mainly for external use as antirheumatic. Recent work has shown activity in heart disease but its current craze comes from its adaptogenic and immunostimulant properties particularly studied in Russia and China. Since 1960 more than 180 pharmacological, phytochemical and clinical studies have been published (51% in animals and 94% in humans).

PiLeJe EPS or   are obtained by the " PhytoStandard " extraction process that respects the integrity and completeness of the active ingredients present in the plant.

We suggest you to prepare your PiLeJe EPS blends , according to the formulas recommended by your Naturopath .

Standardized Fresh Plant Extracts of R. rosea root have a stimulating effect. Cognitive functions (attention, memory, learning) are increased hence the use recommended to slow memory deficits. Studies show an increase in physical and mental performance. Considering these data, numerous tests were undertaken around 1970 on Russian athletes, tending to prove the beneficial effects of rhodiola on the increase of performances. In humans, in a study involving 53 healthy subjects and 412 with various neurotic disorders, psychostimulant effects were observed with positive action in asthenia.

In one study, the authors show that the hydro-alcoholic extract of roots of Rhodiola rosea L. exerts a powerful anti-depressive activity by inhibiting MAO A and can also find an application in the control of senile dementia, by its action inhibiting MAO B.

In recent studies in mice, the authors have shown that the hydroalcoholic extracts of Rhodiola rosea reduce the signs of nicotine withdrawal (anxiety, somatic signs and locomotor activity).

In addition to its well-known "adaptogenic" activities, Rhodiola is also a cardio-protective and regulator of the heart muscle. It normalizes the heartbeat immediately after intense physical exertion and lengthens the cardiac contraction phase while lowering blood pressure. This effect is probably due to its inhibitory effect on angiotensin (ACE), where the authors show that the alcoholic extracts of Rhodiola rosea have a greater action (38.5%) than the aqueous extracts (36.2%). ).

Rhodiola is also an anti-radical: its antioxidant properties have been the subject of many studies. It inhibits many enzymes (phospholipase A2 - COX-2), has a strong inhibitory activity of xanthine oxidase, xanthine oxidase plays an important role in the absorption of iron in the small intestine and its mobilization in the liver. The reduction of xanthine oxidase activity is associated with a concomitant decrease in iron transport in the blood.

Metabolically, Rhodiola has a hepatic protective effect. The hydroalcoholic extracts normalize the activity of aspartate aminotransferase, alkaline phosphatase, and urea and bilirubin peptides. These extracts would promote good blood sugar by acting on insulin levels and correcting pancreatic hypoxia.

If Rhodiola rosea is a plant with multiple effects and is devoid of toxicity, it remains no less true that like all plants, it is a remedy intended to "correct a state" and not a banal plant, "object of trade ". Its unmarked use would lead to a rarefaction of the species, which unfortunately is occurring in some harvesting areas. 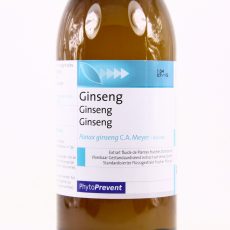 What is the difference between the EPS (PhytoPrevent) and the SIPF (Synergia)?

In order to quickly explain the difference between these two types of fresh medicinal plants extracts, we will first see the S.I.P.F. method, then to highlight the 2 final and original steps of the E.P.S. process. : the leaching where alcohol is added to the cryobrilled plant mixture, gradually increasing the alcoholic degree and the addition of glycerin, after evaporation of the alcohol and assay of the tracer, the last operation is to add the vegetable glycerin to ensure standardization products. The S.I.P.F.  is a manufacturing process that has the particularity of preserving all of the constituents as they were in the native state in the fresh plant (same for the E.P.S. ). This...