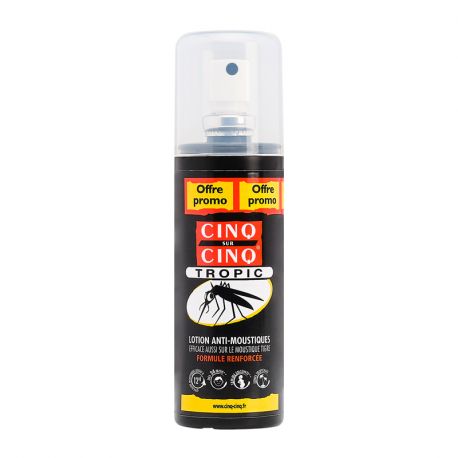 The Tropic Five out of Five Mosquito Lotion is designed to protect you for 8 hours from the risks of bites from 5 species of insects. This Cinq sur Cinq Tropic spray contains IR3535 to protect you from insect bites in tropical areas . Suitable for pregnant women   that   children over 24   months .

The Tropic Cinq sur Cinq mosquito spray has been developed to suit risk areas, and remains effective for up to eight hours at a time.
It is suitable for pregnant women and children over 24 months, and has no photosensitizing action.

Cinq sur Cinq Tropic is composed of the repellent IR3535 , recognized by the World Health Organization and whose effectiveness has been proven in the laboratory and in the field.

Effective against mosquitoes, ticks, wasps and horseflies, it is therefore effective in temperate and tropical environments, and is one of your allies against bites while traveling.

Use the mosquito repellent spray 5 out of 5 for the legs: we recommend using a biting insect repellent clothing from the ankles to the knees so as to also avoid tick bites, also to be used on shoes (always for ticks) .

Use tropic mosquito lotion for the hands: it is preferable to use the mosquito repellent clothing on gloves in very difficult areas, like swamps, we can put in addition to the repellent on the back of the hand and the wrists (sometimes momentarily discovered when an arm is extended).

If you are hiking or walking , spray a suitable mosquito repellant (child or adult) on the bare areas, to renew every 6 hours or even every 2 to 3 hours if you sweat a lot!

To protect yourself from mosquitoes, the first measure to be taken is to be vigilant about what can be used as a "larval shelter". Larvae are found in all water collections where mosquitoes can lay eggs: swamps, hollow trees, old tires ... The World Health Organization (WHO) advises skin repellents, mainly those containing DEET from l 'IR3535 or Icaridin.

IR 3535 or 35/35 is a synthetic repellent, whose effectiveness is recognized against mosquitoes in temperate and tropical zones.

Precaution for use with five / five tropics

Do not use more than 3 times a day and on children under 30 months.

Our opinion of pharmacy experts

When traveling (business trip or tourist trip) in tropical or humid areas at risk for pallusism and malaria, you can be calm, you do not risk insect bites.

IE 3535 is a synthetic repellant, whose effectiveness is recognized against mosquitoes in temperate and tropical zones.

Get to know the different biting insects better.

Culex mosquitoes are the predominant mosquitos in mainland France. There are many species including the Culex pipiens or common mosquito that we all know. Most Culex subspecies prefer to bite birds rather than humans or other mammals. They are therefore often considered to be less dangerous than the Anopheles or Aedes mosquitoes. However, they can spread serious illnesses like West Nile fever or Japanese encephalitis.

There are approximately 260 species of Aedes mosquitoes on the planet. The Aedes mosquito takes its name from ancient Greek, which means "unpleasant", and which is justified by the very strong nuisance caused by this kind of very aggressive mosquito with a painful bite.

Among the 3,500 existing mosquito species, there are approximately 430 species of the genus Anopheles. Very feared, the Anopheles mosquito is the mosquito capable of transmitting malaria.

Ticks are mites that have existed for around 140 million years. There are more than 800 different species. Known to parasitize pets (especially dogs), they can also take humans as their host. Ticks can transmit serious, life-threatening diseases. Men can also develop allergies to their bite, even when they are not infected.

Sand flies are very small insects that look like small midges. They are susceptible to transmitting serious illnesses.

Appearing 65 million years ago, flies have always been a nuisance to humans throughout its history. The word fly is a generic word that designates a large number of very different species of insects that are found in the orders of Diptera (ox or horsefly, housefly, tsetse fly), ephemeroptera (mayfly) , hymenoptera (gall fly), beetles (fire fly), hemiptera (pissing fly which is a bug) or even mecoptera (scorpion fly). 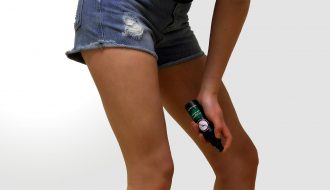 How to choose your mosquito repellent?

While mosquitoes in Europe are mainly synonymous with sleepless nights and itching, other tropical species, such as the tiger mosquito, are vectors of serious illnesses such as malaria, Zika virus, dengue fever, chikungunya or Yellow. Therefore, it is important to know how to choose its insect repellent to protect well according to the geographical area (temperate zone or tropical zone), depending on the type of mosquito and the disease (malaria, dengue, chikungunya…) and in function of the User: adult, child (age), pregnant woman. Why do mosquitoes sting us? In the mosquito, it is the woman who stings. Filled with fertilized eggs, it needs the proteins contained in the blood to...