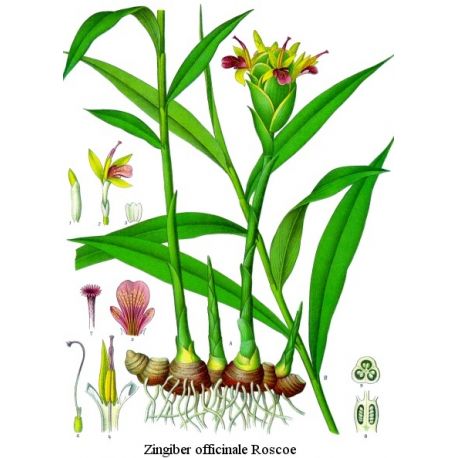 Ginger is a plant that first fight against nausea during pregnancy, nausea associated with chemotherapy, it helps digestion, tones the most weakened bodies, this is a great aphrodisiac.

Ginger was called zenj by Arab merchants, word by which they designated as the inhabitants of the east coast of Africa and where does the name "Zanzibar", where the Arabs would find ginger.

Indian texts dating from 1000 BC prescribed ginger for ailments ranging from asthma to hemorrhoids. Asian doctors still use it.

Properties of the root GINGER

Indications and uses of the root GINGER

There is a dietary supplement NEW MOONS nausea for pregnant women that includes a heavy dose of ginger, able to fight effectively against the nausea during pregnancy .

How to make a decoction easily ginger root

From the rhizome of ginger oleoresin are extracted (6%) and an essential oil (1-3%). The oleoresin contains the chemical compounds responsible for the pungent flavor, such as gingerol (15%).

The composition of the essential oil of ginger varies greatly according to geographical origin but odorous compounds found as zingiberene the curcumene, camphene, bisabolene, citral and linalool. Both extracts are used in the flavoring of food, while only the essential oil is used in perfumery.