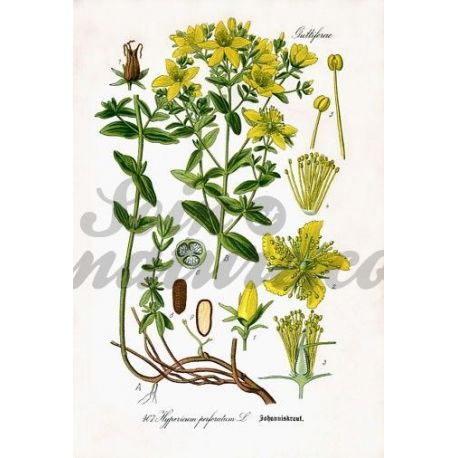 St. John's Wort has antidepressant properties, the activity is related to inhibition of the reuptake of neurotransmitters (serotonin especially dopamine, noradrenaline) and moderate interaction with the GABA-A receptors (mainly hyperforin). It is anxiolytic, sedative even with free extracts of hyperforin. The naphtodianthrones are highly reactive in the presence of light and it is these that give the red color of the oil, hyperforin would be the most serious candidate. The amentoflavone binds to the benzodiazepine receptor. The antidepressant effect is probably due to synergy between different substances. Hypericin is sedative and melatoninergic, it could fight against cytomegalovirus and herpes simplex. It is a neuroprotective plant. The hyperoside acts on human brain tumors, and induces inhibition of tumor growth of leukemic cells and of brain glioblastoma cells. St. John's wort is as serotonin and melatoninergic (leads to an increase in melatonin levels). There is a modest vis-à-vis behavioral stressors activity.

A meta-analysis reported in 1996 the results of 27 trials (1757 patients on overall) comparing St. John's wort or placebo with either active treatment. It suggests that St. John's wort was more effective than placebo and as effective as tricyclic antidepressants (TCAs) in low doses in the treatment of depression. Its mechanism of action appears to be similar to that of conventional antidepressants: inhibition of monoamine reuptake.
A test double blind on 324 patients suffering from mild to moderate depression were treated with an alcoholic extract to 0.2% hypericin showed a similar efficacy to 50 mg of imipramine twice daily, another study showed as effective as imipramine, with better tolerance.
Products based powder Millepertuis to consume orally, sold without a medical prescription, are currently marketed in France illegally.

St. John's wort is used in the following therapeutic indications:

- Possible reduction of the effect of the drug secondary to a decrease in the plasma concentration as a result of the possible induction of CYP2C9, CYP3A4 and CYP1A2

- St. John's wort gradually and powerfully induced CYP3A4 activity, elimination of ethinyl estradiol, a major substrate of CYP3A4, will be greatly accelerated in the presence of St. John's wort, therefore, the contraceptive effect is no longer assured and it will provide a another method of contraception

Any compounding same homeopathic Hypericum MUST behave on the packaging the words: "Caution, risk of drug interactions. The combination of this preparation St. John's wort with other medications can cause a decrease in their effectiveness. Conversely, a sudden interruption of taking the wort intake can increase the toxicity of these drugs. Ask your doctor or pharmacist."