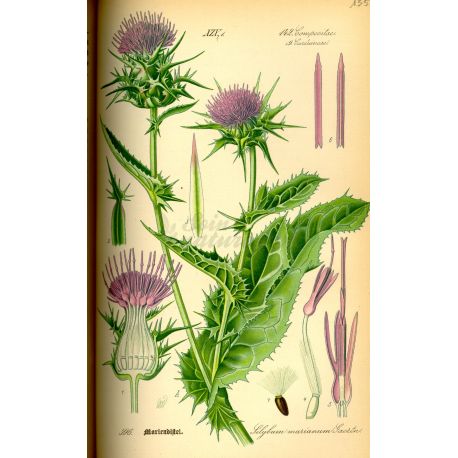 silybum silybon comes from the Greek, the name of a thistle whose leaves were consumed; marianum, in memory of Mary who dropped milk on leaves wanting to preserve jesus soldiers of Herod.

Stimulating the appetite of people anxious and stressed, milk thistle relieves disorders of the liver and spleen, relieves pain, facilitates intestinal transit decongestion of the vesicle. While balancing the solar plexus, it activates the function of the stomach. It fights various bleeding, hematuria, disorders of menopause with fibroid bleeding hemorrhoids, gallstones. The seed increases blood pressure, it's welcome after an operation or in hypotensive.

1 tablespoon to 1/4 liter of boiling water.

Take 3 cups a day before meals.

The European Commission approved in 1989 the use of the extract standardized to 70% silymarin to treat liver poisoning and as adjuvant hepatitis and cirrhosis. In 2002, WHO recognized substantially the same uses.

Europeans generally consider that silymarin contains milk thistle is one of the most powerful hepatoprotective substances. Even in conventional medicine, it is used for the prevention and treatment of various disorders related to the liver: hepatitis, cirrhosis, gallstones, jaundice (jaundice) and hepatotoxic damage. In the opinion of clinicians who use it in their practice, silymarin can regenerate damaged tissue of the liver in addition to protecting the organ against the effects of natural toxins (mushrooms, snake bites, insect bites, alcohol, etc.) or synthetic (solvents, detergents, medicines, etc.). Silybin appears to be effective in the case of poisoning by Amanita phalloides.