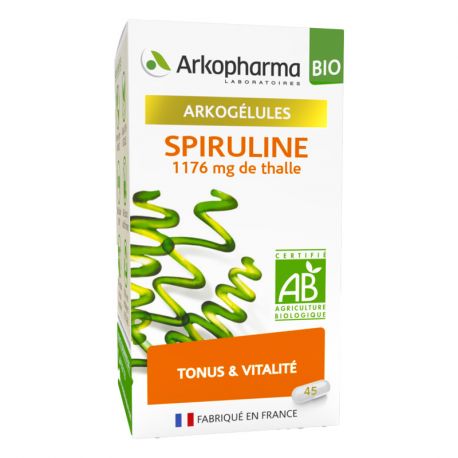 Organic Spirulina Arkogélules 45 or 150 capsules Arkopharma is a food supplement allowing to find vitality and energy.

Organic Spirulina, also called Blue Algae, is a cyanobacterium: it is neither totally vegetable nor totally animal. It has existed for over 3 billion years and was discovered in Central America by Europeans. At that time the pre-Columbian Aztecs of Mexico consumed a lot.

Spirulina is above all a super vegetable food, which finds all its interest in food supplementation. It also has particular medicinal properties due to its composition which is very rich in specific and specific molecules, which gives it, among other things, fortifying, revitalizing properties.

All these assets are essential for the proper functioning of the body: they fill in the deficiencies and rebalance. They have energizing and vitalizing virtues.

Your body receives all the elements essential to its proper functioning which results in a revival of vitality and tone.

Spirulina therefore provides all the necessary ingredients to keep in shape, supplement a deficient diet, support the body during adolescent growth spurts, convalescence, improve poor morale, support in times of stress, give tone to periods of fatigue, at interseason, increasing the performance of athletes, keeping people eating little, with anorexic tendency, the elderly…

Spirulina will be very useful for expecting mothers or after pregnancy to restore their health capital and quickly regain the line without suffering from deficiency.

Several studies show that spirulina or its extracts interact with the immune system which it helps to stimulate. Research shows that spirulina also has an antiviral action.
Spirulina helps to slow the aging of the skin thanks to its antioxidant molecules (gamma-linolenic acid, phycocyanin, tocopherol, carotene, selenium and zinc) which prevent the formation of free radicals. The gamma-linolenic acids of spirulina bring flexibility, elasticity, and therefore softness to the epidermis.
The cell wall of Spirulina is very thin, unlike sea algae: nutrients are therefore quickly and completely absorbed by the body and easily assimilated by children and the elderly.
The purifying activity of pure spirulina leads to a rapid and efficient evacuation of pollutants and lactic acid. It therefore allows an increase in energy and faster recovery after training or competition.

During meals, take 2 capsules morning, noon and evening with a large glass of water.

As a support during a slimming diet, take Hawaiian Spirulina half an hour before the meal with a large glass of water.
Take daily once in the morning or several times a day.
It is better not to take Spirulina in the evening, you could be too active by the time you go to bed. But it is a solution if you still have to work in the evening or if you want to go out pleasantly.

The protective effects of phycocyanin extracted from organic spirulina

Like all pigments, including chlorophyll which also contains spirulina , phycocyanin has recognized therapeutic properties which have been developed in various animal models in vivo and in vitro: anti-inflammatory, antioxidant, antitumor, and immunoprotective .
A 2012 Egyptian study (1) proves the anti-tumor (anti-cancer) and antioxidant activity of spirulina compounds , including phycocyanin.
Another Chinese study from 2013 (2) - microalgae like organic spirulina have been known and used for a long time than here in Asia - checks the antioxidant power of phycocyanin on red blood cells. The use in Asia of micro-algae like spirulina has been widespread for a long time. Chinese scientists have also shown that phycocyanin stimulates blood production and has the same effect as EPO, produced by the kidneys.
A Japanese study from 2013 (3) also shows that phycocyanin prevents hypertension.

Given its high productivity, spirulina requires 30 times less crop area than soybeans, 40 times less than corn and 300 times less than beef.
Spirulina consumes much less fresh water per kg of protein than any other food: 3 times less than for soybeans, 6 times less than for corn, 50 times less than for beef.
Spirulina production is very inexpensive in energy (including solar energy and the energy supplied). The energy yield of spirulina (energy produced in kg / energy consumed per kg) is 5 times that of soybeans, 2 times that of corn and 150 times that of beef.
Eating less meat and replacing it with spirulina can drastically reduce the consumption of fresh water linked to the cultivation of plants that feed livestock, and consume much less land for crops. This therefore reduces deforestation and erosion of biodiversity, and also reduces contamination of the environment by pesticides, etc.
Less meat is also less cholesterol and fatty acids, which is anything but negligible in terms of health (cardiovascular problems, obesity etc.). Spirulina, a alicament of exception

Arthrospira Platenis is the scientific name of this wonder of nature that is spirulina. Halfway between the plant and bacterial world, capable of achieving photosynthesis, as a plant, but at the same time prokaryotic as a bacterium, the curious Arthrospira Platenis appears on Earth more than 3.5 billion years ago and has hardly evolved Until today, showing incredible capacity for reproduction and resistance. Spirulina has the appearance of a blue alga belonging to the field of cyanobacteria and measures about 250 mm. It is composed of movable filaments of 10 to 12 mm sometimes coiled in spiral, hence its common name. Under a microscope, Spirulina looks like a tiny spring. The current...